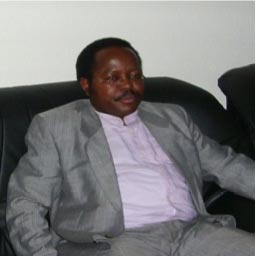 Johnson BELANGENYI Ngindu has a diversified educational and professional background. After a psycho-pedagogic secondary school in Ecole Normale Mfuki, Mikalayi, he leaves his native Kasa?ï-Occidental Province to further studies at Institut Pedagogique National where he gets first and second degrees in English coupled with competence in African culture and linguistics. Owing to para-academic activities in the Students’Union and Youth wing of the then-one Political Party, he is nominated Assistant Coordinator in charge of the documentation services at the Interior Ministry while he is moonlighting as language teacher in public and private institutions in Kinshasa. Later, Belangenyi Ngindu becomes translator-interpreter at the inter-university cooperation services at the Ministry of Higher Education and Scientific Research. To better his pedagogic and linguistic competence, Belangenyi Ngindu is granted a British Council scholarship which enables him to get both a Diploma of Advanced Studies in Linguistics and English Language Education ( Lancaster University, UK) and a Master’s degree in Translation and Interpreting ( Salford University). He has become familiar with the international affairs through his internships at the WHO Headquarters in Geneva and the Brussels Headquarters of the European Union. Following socio-political instability in Zaire ( RDC), Belangenyi Ngindu goes to Cameroon where he is language teacher and Assistant Lecturer respectively at the Yaounde University Bilingual Services, the International Relations Institute of Cameroon, College Notre Dame de Sangmelima, the Bandjoun Fotso Victor University Institute, College d’Enseignement General et Technique de Bafoussam, Ecole Superieure de Sciences et techniques (Douala) to name but a few.

Freelance translator, he collaborates with the local branches of the Catholic Relief Services, the ILO, the FAO. After an attempt to go back to DRC after the short-lived peace following the regime change, Belangenyi Johnson is forced to move to Switzerland where is living nowadays.

Darting between studies and jobs, Belangenyi Ngindu has worked respectively in a recyling occupation programme, as a railway catering-steward, a freelance translator-interpreter, as a trainer of community interpreters and translators for Swiss-Exile Migrants Consultancy, as Actor-Singer at the Bern Theatre, as voluntary worker at the Penalties and Alternative Sanctions Service in charge of prisoners’visits and guidance.

He is currently interpreter, teacher of business plan, communication, conflict prevention and team work at HEKS Perspective as well as translator-transcriber for the Hague-based International Criminal Court. His expertise has been boosted by a certificate in Legal writing from the constitutional departement of the Geneva University, a certificate in international commercial Arbitration and Alternative Conflict Resolution by the United Nations Institute for Training and research, two certificates by the Pisa-Italy Institute for Conflict Management and the Ghana-Legon Institute for International Relations respectively in Peacekeeping and Governance for African Civilian Personnel and in Trainers’ Training.

He is currently attending postgraduate Peace Studies at the N/W Hochschule für Soziale Arbeit. He has also participated in the interpreters’cognitive analysis workshop in France, the Theatre and Reconciliation Workshop in Brussels, the non-violent communication violence seminar in Biel-Bern, the Literary Translator Pilot Workshop by the Bern Higher School of Arts.

Natural leader and father of 5 children, Belangenyi Ngindu has always been part and parcel of Cultural, Social, Migrant and human rights organisations as he is also one of the Swiss-Based African Diaspora spokespersons. As he always puts it himself, being nowadays older than his father who died very soon, there are today two lives entertwined in him, and so, for other people’s sake. Thus, his presence in this network.