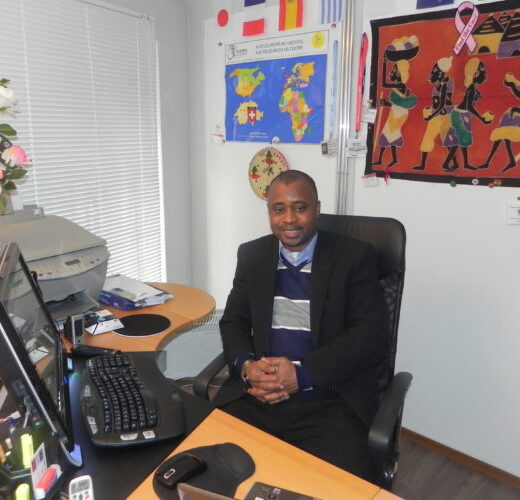 The President of Afro-European Medical and Research Network (AEMRN) Dr. med. Charles Senessie had his medical Education at the College of Medicine and Allied Health Sciences (COMAHS), University of Sierra Leone in West Africa with published final year medical school dissertation on delays in childhood immunization.

Since his early school days, he had always had the vision of voluntary services to the underprivileged especially in hard to reach communities. Together with a lifelong friend James Wallace-Kargbo, they would always spend their summer vacation in rural areas of Sierra Leone with Voluntary Workcamps Association of Sierra Leone (VWASL), Rotary club, Boys Scout movement or The President Youth Award Scheme helping out in various community projects. These included projects such as agriculture, serving handicapped, syndromic including mentally retarded children in their group homes, building of community recreational parks, replanting of mangrove trees in swamps to rehabilitate and protect the ecosystem. They also took part in tree planting on deforestated hills to prevent erosion and likewise protect the flora and fauna.

Whilst in Medical school, Dr. Senessie was member of various student groups including President of the Students Union, founder and first President of the medical school branch of VWASL and others. Under the objectives of the organisations, they organised various workshops and seminars on issues such as HIV/AIDS. They also extended their services to the poor people in the remote villages organising series of medical camps in the rural communities including villages of Tombo in Western Area of Sierra Leone, Moyamba and surrounding villages in Southern province and Port Loko and surrounding towns in Northern Sierra Leone. Thus during Summer vacations, a medical camp with mobile clinics comprising of local and international doctors, medical students, nurses,  nursing midwives and nursing students as well as students from vocational instutions and other constituent colleges of the University of Sierra Leone, would take health to the rural people in their natural settings. From the main towns, mobile clinics went out every day to the surrounding villages. Health promotion and educational awareness programmes formed the focus of attention in addition to clinical treatment, minor laboratory investigations and community based studies. The medical camp due to its international, multicultural and multidisciplinary nature provided an excellent forum for cross-cultural exchange and experience sharing among the campers themselves as well as the villagers they were helping, hence minimising cultural shock and contributing to global peace.

During his medical training, Dr Senessie expressed keen interest in Dermato-venereology including HIV/AIDS – the one single virus threatening the existence of humanity in general and the African population in particular.

He was employed in the department of internal medicine, College of Medicine and Allied Health Sciences, University of Sierra Leone and gave lectures on Dermatology and ward teaching to clinical year students.

He was later President of the African AIDS Research Network (AARN) for West and Central Africa representing Sierra Leone and presented series of papers on the topic at home and abroad. He was also Secretary General of the Sierra Leone Medical and Dental Association, Member of Medical and Dental Council of Sierra Leone, Assist. Secretary General of the Sierra Leone Private Medical Practitioners Union, focal person for non-communicable diseases in the Ministry of Health and Sanitation Sierra Leone, Director of Vinel Community Hospital, Local Consultant for the World Health Organization (WHO) in Sierra Leone – assessing medical facilities in the major referral hospitals in the capital city Freetown and series of other leadership roles.

Dr Senessie is founder of the Afro-European Medical and Research Network (AEMRN). He has worked in Switzerland as Research assistant in the Division of Epidemiology and Biostatistics at the Institute of Social and Preventive Medicine (ISPM)at the University of Bern, University Children`s Hospital Basel (UKBB), World Health Organisation (WHO) Geneva where he was also part of the 20-member Reference Group (Think Tankers) of the Gobal Health Workforce Alliance (GHWA) charged with the task of addressing the critical shortage of health workers in low income countries. He has had consultancy with the WHO Reproductive Health and Research in Piloting the Knowledge Centre project in Bishoftu, Ethiopia, was in 2014 Consultant for the WHO Global Initiative for Emergency Essential Surgical Care(GIEESC) and Integrated Management of Emergency Essential Surgical Care(IMEESC) tool-Kit introduction to Sierra Leone.

He still works as a physician in Bern, in addition to other engagement as Clinical Study Reviewer in Division of Clinical Trials, Swiss Federal Agency for Therapeutic Products(Swissmedic) in Bern Switzerland.

Dr. Senessie at the same time, pursued and is pursuing further postgraduate studies in Epidemiology from the London School of Hygiene and Tropical Medicine, University of London, in Public Health with the Inter-University postgraduate programme of the Universities of Bern, Basel and Zurich in Switzerland.

He successfully defended the dissertation titled ” Prevalence of single nucleotide polymorphism of cytochrome P450 enzyme (CYP3A4, CYP2B6, CYP2C8 AND CYP2D6) in treatment experienced HIV patients in Freetown Sierra Leone”  and was awarded PhD in Health Sciences majoring in International Health Research and Education at Trident University International in California, USA and concluding another PhD in Public Health majoring in Epidemiology from the Walden University in the USA, in addition to a Postgraduate Diploma in Dermatology in Clinical Practice and a Masters of Science (MSc.)  in Dermatology in Clinical Practice both from the University of South Wales, Cardiff, UK.

He has recently been featured in the 2016 published book on “The Most Influential Contemporary African Diaspora Leaders together with President Barack Obama, Rev. Jesse Jackson Snr., Dr. Oprah Winfrey and other famous role models.

Inclusion in this book is a prestigious honor for the African Diaspora leaders across the globe who have accomplished outstanding tasks and who have demonstrated excellent professionalism and character while performing duties related to Africa and the African diaspora. The recipients were nominated and vetted by an International Selection Committee composed of some of the top undeniable African Diaspora leaders in Caribbean, Europe, North America, South America, and West Africa.

He has presented series of papers around the world including at the Global Health Council in the USA and is very keen on evidenced based practices and operative research.