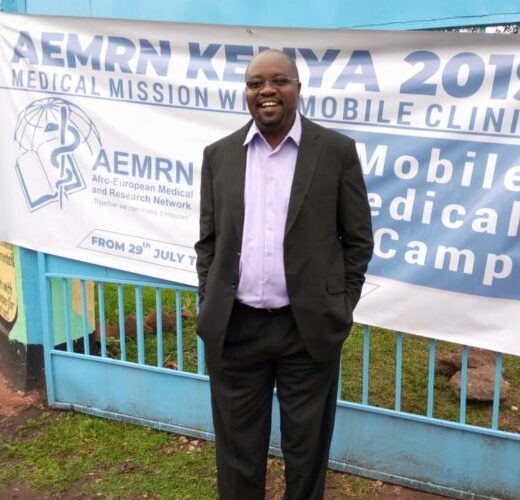 Geoffrey Kasembeli was born in Bungoma County, Kenya and is the AEMRN consultant.

He started school in Kaptanai primary school, then Maseno National School for secondary education where he finished his A-levels in 1989.

Dr. Kasembeli joined the University of Nairobi to study medicine in 1990. This was his first time to venture out of western Kenya.

He qualified with the degree in medicine and surgery in late 1996 and was posted for his internship training in provincial general hospital Nakuru on 5th November 1996.

He did the rotations in pediatrics, internal medicine, surgery and obstetrics, and gynecology. His most enjoyable rotation was pediatrics, where he recall vividly how they successfully resuscitated and saved many children. He completed his internship training and posted in the same hospital as a medical officer in surgery.

In October 1998 whilst on vacation and working in Kakuma refugee camp as a doctor with the Catholic Diocese of Turkana, he noted the acute shortage of health personnel and requested the provincial boss to transfer him to Turkana which he promptly did in less than ten minutes (most workers shun the place because it is a desert and banditry is rampant)!.

Later on, the government and the international committee of the red cross called on him and Dr. Agutu to start a medical emergency ward in ICRC Hospital Lopiding in Loki to care for medical cases only. He worked with ICRC till late 2000 then was re-assigned to go back for his postgraduate and specialized training. He did his specialized training in obstetrics and gynecology and also a postgraduate diploma in sexually transmitted infections from the University of Nairobi, medical school, Kenyatta National Hospital.

During his postgraduate specialization, he did his MMED research thesis on Nevirapine intervention in HIV positive antenatal women in provincial general hospital Kakamega and reproductive health tract malignancies.

Dr. Kasembeli is currently working as a county obstetrician in Kitale District hospital and as the Deputy Medical Superintendent of the hospital which has a bed capacity of around 350 beds but bed occupancy is 140%.

As the AEMRN consultant, we have organized two very successful medical camps and we are looking forward for more enriching and successful ones in the near future.