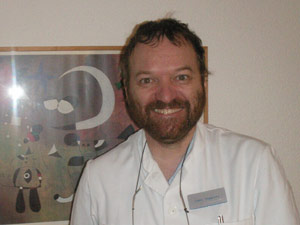 Ueli Haenni was born in Bern-Switzerland and is the consultant to AEMRN.

He  went to school in Zollikofen, where he now returned to live, and from school year 10, he went on to a higher school in Bern. He obtained a Matura Type C in 1975, entrance ticket (mathematic/scien­tific at that time) for every Swiss university. Besides serving 4 months compulsory military, in 1976, he traveled across the United States of North America with his best friend and returned there on his own in 1977 to be an international Camp Counselor at a YMCA summer camp in rural Connecticut for two months (meanwhile he served 5 more months in the army as Sanitätskorporal). At the YMCA camp, as he was responsi­ble for “a tentful” with seven boys aged 14 years he acquired a good grip of spoken English language.

During, or besides, medical school at the University of Bern, he went to Turkey for just a month during a semester break for an IFMSA medical student exchange clerkship, and experienced the work of his 5 year older, young Turkish doctor colleague at a rural health post 30 km North of Ankara, 7 000 population attached to the health post with 7 staff including everyone (much like at the AEMRN in 2007 we had a first very similar post in Monrovia-Liberia) and with a back-up hospital for 100 000 patients. The year 1982 was the time, when we were still hoping, with the WHO, for “Health for All by the year 2000“. Another clinical clerkship took him to still communist and a bit of solidarnosc Warsaw, Poland, to vascular surgery at Banacha hospital. Still before graduation, thanks to contacts he had as the Swiss delegate to the IFMSA  (International Federation of Medical Students Association), he spent a month at the WHO world headquarters in Geneva, with Dr. Jean-Jacques Guilbert, an expert on Medical Education, and could partake in the 1984 May, WHA (World Health Assembly) as a medical student representative for the IFMSA. He graduated from the University of Bern Medical School in 1985.

He has been in Africa once only, 3 months at the Hôpital ad Lucem, 500 beds, in village of Bafang in the Département du Haut N’ Kam in Cameroon, 4 hrs of bush taxi from the big town of Douala, in the year 1988. Very intense experience, difficult to put in words here. One photograph he took with a quite long exposure from a moving car of a lady carrying the water for her family on her head had to come out blurred and it did: when presenting the slide, Ueli likes to admit, that 3 months were too short, so he was “unable to see a clear picture of Africa“. He would like to return, but environmental preoccupations about the Global warming let him tend to wait for solar powered aircraft.

Much more sedentary after specialization training (working in hospitals in Switzerland) as a GP and opening up, in 1992, his own private practice in Zollikofen, he has been married since 1990 to Simonetta Rossi from Italy.

An involvement with migrant people here in Zollikofen started, when, in 1996, he was asked to serve the local refugee camp, 70 beds, as the first-line physician.

Seeing also few patients with the HIV, he knows a bit about this terrible threat to the African continent and its population, because the patients are being followed by the corresponding HIV/AIDS Specialists in Bern and nearby Muri and he is their first line, not specialist physician.

He enjoys riding on bicycle, as he favours vegetarian food. You may wish to learn that he knows the international language Esperanto & 5 more besides English languages, namely German, French, Italian, Dutch and Spanish .